All three parts reside in the cloud and it is the .trex manifest file that allows user to connect to the above extension ecosystem from Tableau.

The below scheme and information details all measures taken to ensure maximum data security across all endpoints within the environment. 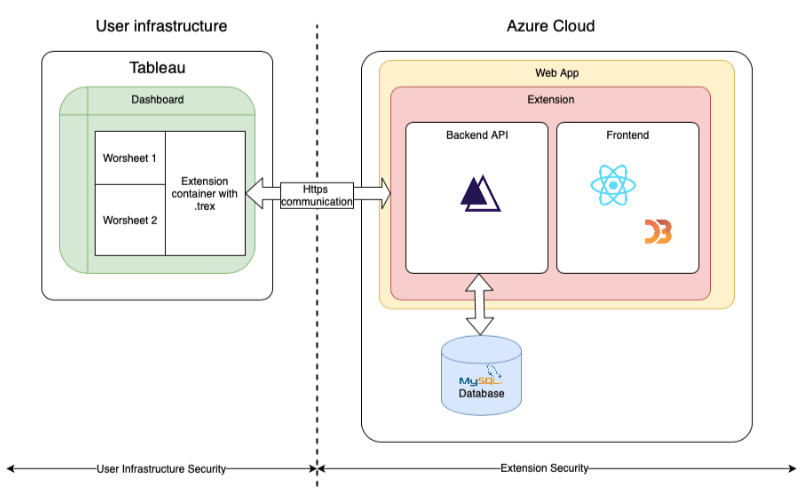 By placing the .trex manifest file as object into Tableau dashboard(s), user allows it to point to a remote domain of respective web application on Microsoft Azure. This provides access to extension’s interface, which always begins with user authentication.

User Infrastructure Security: Billigence is in any case not responsible for security within user premises (left side of above scheme). It is the sole responsibility of the user and their governance / data security team to guarantee that unknown users cannot gain access to or use their systems including Tableau and data within it.

Extension Security: is primarily based on security measures of Tableau extensions API, Microsoft Azure cloud infrastructure and third-party libraries / frameworks used to develop extensions. On top of that great effort was gave to be sure that mostly of security standards were applied on each of the components involved. These points are described on the next chapter.
Trex

Because of their nature, extensions can interact with other components in the dashboard(s) and have access to underlying data in the workbook (via Tableau API).

Below measures were taken to guarantee safety of sensitive data:

– Extensions are stored on Microsoft Azure infrastructure guaranteeing high security standards as well as service availability. Credentials and other user data used for authentication are encrypted.

Using HTTPS permits that all HTTP data is encrypted prior to the transmission by the Transport Layer Security (TLS) and decrypted when it is received. HTTPS ensures a secure channel between the extension (client), running in the Tableau dashboard, and the web server that hosts the extension in Microsoft Azure infrastructure. The use of HTTPS provides a high level of privacy, authentication and integrity.

Using HTTPS assures that data is safe and that users are connecting to a trusted extension. Because the extension is using HTTPS, Tableau is also able to verify the identity of the server that hosts the extension, which prevents various malicious man-in-the-middle attacks that could occur if the extension were to use HTTP alone.

Tableau by default checks whether HTTPS standard is applied and if it is not, extension won’t work.

Any third-party library used for developing the frontend part is referenced with HTTPS (even if not directly related to data).

ReactJS is developed by Facebook community; this guarantees that the library is frequently updated to the best and latest security standards. Even when crucial part of application security resides on the backend, many security issues are in fact prevented on the frontend by ReactJS by default (e.g. XSS attacks or Script Injections).

All stored user passwords in the database are hashed. Decryption is done by AdonisJs and there is no option to retrieve them or perform any kind of general attack.

AdonisJs uses Bcrypt standard, which is considered one of best for password encryption.

To avoid a scenario in which all chart visualisations and extension-related parameters are lost when Tableau workbook file is closed, the data retention feature was added. In this case, Tableau settings are used to store all parameters and variables needed, which gives the possibility to reload them once Tableau dashboard(s) with extension is / are opened again. This allows to see the same chart rendered as user was presented with before closing Tableau workbook.

Authentication tokens are also saved in Tableau to avoid users having to re-login every time. Both above features happen on Tableau side only.